Recently we were tragically exposed to the thought process of Eero Heinäluoma, a socialist member of the European Parliament. While there doesn’t seem to be a proposal to ban Bitcoin mining at the moment, it can be assumed that such a proposal is only a matter of time.

The war on reality

Mr Heinäluoma’s brilliant idea is to stop Bitcoin’s “use of underlying technology” which means banning proof of work. This misinformed stance is of course followed by a call to cryptocurrencies to move to a more “climate-friendly” consensus in the form of proof-of-stakes.

Does it even matter, repeating for the thousandth time, that the proof-of-work is Bitcoin’s fundamental breakthrough that ensures the neutral, predictable monetary policy so sorely lacking in today’s fiat-infested world? These people don’t seem to care; it’s like they’re waging a war on reality.

When the crusaders of the government action like Mr. Heinäluoma go to work, the facts fly out of the window. You have to sell a good looking story. And the story related to bitcoin mining is that it is harmful to the environment and someone should do something about it, which means the government should ban it as it normally does.

The good news is that bitcoiners have facts on their side.

According to Michael Saylor’s Bitcoin Mining Council (BMC) and his Q2 Global Bitcoin Mining Data Review, these are the most recent discoveries about the nature of Bitcoin mining:

Previous estimates of the share of renewable / sustainable energies in Bitcoin mining are between 39% (study by the University of Cambridge) and 73% (study Coinshares). In contrast to the BMC report, these two studies do not include nuclear energy or CO2 compensation in their calculations. All in all, around 50 percent of sustainable energy seems plausible, especially if you understand the incentives: Miners are naturally looking for the cheapest energy source, which is otherwise often unused renewable energy (water, sun, wind at peak times). or so-called stranded energy, such as flared natural gas from drilling rigs.

How does the European Union compare to Bitcoin in terms of sustainable energy?

According to the official Eurostat energy statistics, the European Union uses 15% of renewable energies and 13% of nuclear energy, which corresponds to a total of 28% of sustainable energy production.

Bitcoin mining is much greener than the entire European Union.

The nice thing about it is that while for the European Union the increasing share of renewable energies is achieved through a top-down, politically motivated program that is associated with enormous costs and increased network instability, for Bitcoin it is only a natural result of economic incentives . As a side effect, Bitcoin is environmentally friendly without anyone having to push it.

As podcaster Marty Bent points out, no renewable / sustainable energy ratio will appease the mighty. Even if Bitcoin were to be mined solely with hydropower, sun, gas flares and volcanoes, it would still be criticized for wasting energy. It’s not about energy statistics, but about perceived legitimacy. Politicians and other fiat maximalists simply have to label Bitcoin as useless and harmful, and they will use any narrative that does their job, be it energy waste, terrorist financing, drug trafficking, malware, inequality, or any other FUD.

The truth is that Bitcoin is a troubling reflection of the fiat establishment. Contrary to hundreds of predictions, after 12 years of existence, Bitcoin is thriving, with one country already adopting it as legal tender while others are watching it, and users being able to conduct global, instant, near-free transactions (via the Lightning Network ). despite numerous claims about Bitcoin’s unscalability.

Bitcoin is the money Europe is making after 20 years under a collapsed currency regime that is dissolving from the start. The euro was introduced in 2002 and had already got into a serious crisis in 2008 when Greece had to be saved. The problem with this was that the single monetary policy acted as a huge subsidy for fiscally irresponsible countries. Greece, along with other PIIGS, used to be a risky country to lend, but the single monetary policy made it possible for these countries to obtain artificially cheap loans. The result was that the country virtually went bankrupt when interest rates rose during the financial crisis. With German banks being the main creditors of the Greek government, the whole system had to be bailed out so that the eurozone would collapse no less than a decade after the introduction of the euro.

The entire eurozone has been sustained by interest-free life support ever since. The eternally easy money policy had a devastating effect on the public finances of the member countries. In order to initially introduce the euro, the acceding countries had to meet the Maastricht criteria, including keeping national debt below 60% of the country’s gross domestic product.

This is what the debt-to-GDP ratio looked like at the end of 2020: 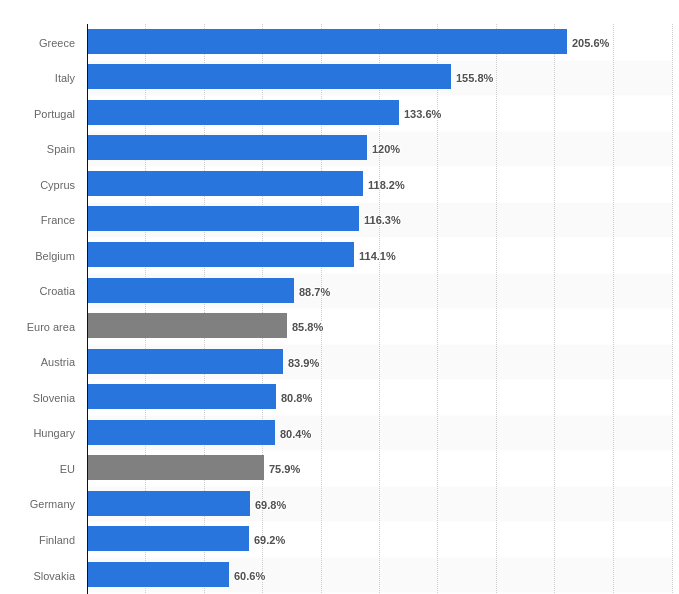 Note: Hungary and Croatia are not part of the euro area.

The euro area consists of nineteen countries. Twelve of these countries would no longer meet the Maastricht debt-to-GDP criteria and would not meet the “mandatory” requirements of the Stability and Growth Pact.

But the biggest joke of all is that Greece’s government bonds are now valued almost the same as German bonds – which means they don’t seem to pose any higher risk than German bonds, despite the fact that the country practically went bankrupt a decade ago and has grown to meet its demands Ears in debt. 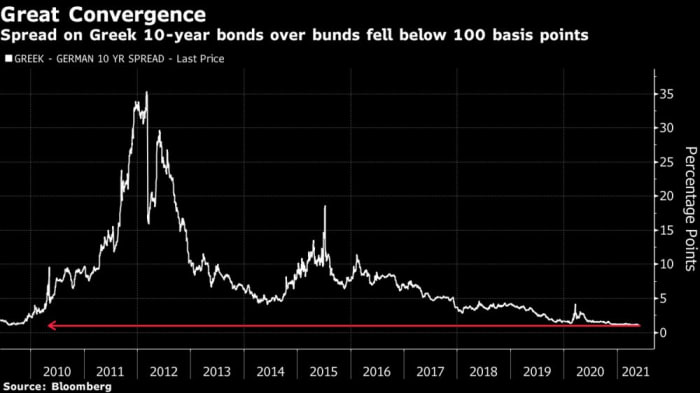 But hey, they have olives; Checkmate Germany.

This is not a criticism of Greece or any other particular country. The politicians in these countries simply follow incentives. And the incentive is to put YOLO in massive debt. Why not? The market doesn’t care as far as we can see on the bond spread chart. That doesn’t matter because of the moral hazard effect: Greece went bankrupt earlier and was saved. Current monetary policy is, if at all, even looser than it was a decade ago.

As some feared when the euro was introduced, the euro functions more like an Italian lira than the German mark. This was inevitable as man-made political constructs like the eurozone necessarily have to cater to the weakest members so that they don’t fall apart quickly.

The euro thus creates zombie countries and zombie economies where all that matters is the free credit to keep the show going. But all debts end up having to be paid off in one way or another – either through cascading bankruptcies or through the complete dilution of existing euro holders (also known as hyperinflation).

It seems that the euro has a sustainability problem.

And those in power seem to be aware of this. When the conventional tools of monetary policy, such as interest rates, are exhausted, central bankers need to get creative. With current fiat money, negative interest rates or helicopter money are unthinkable. That is why the Orwellian digital euro is being actively developed by the European Central Bank.

Of course, the digital euro does not change anything in terms of monetary policy developments. In Bitcoiner jargon, it would rightly be called Shitcoin: centralized and unpredictable monetary policy with an unlimited upper limit, based on proof of authority, pre-engineered, approved and constantly monitored. It can add a few years to the life of the Frankenstein monster Euro, but such abomination still won’t survive long. And hopefully with that the whole premise of a fiat currency regime will die.

[T]he energy requirements of the [digital euro] Infrastructure would be negligible compared to the energy consumption and ecological footprint of crypto assets like Bitcoin.-ECB

And that’s exactly the problem: fiat money can be created out of nothing. The energy requirement may be negligible, but so is the long-term value.

No competition in Fiat land

If the environmental concerns were honest, bitcoin mining would be very welcome in Europe, as bitcoin mining enables the economic exploitation of otherwise wasted energy sources and has the potential to stabilize the grid through the occasional over-generation of renewable energies. As has been argued many times.

The real intention here is more prosaic: to protect your own lawn. The monopoly of money is sacred to the state and must be protected, especially if it cannot exist on its own. The central bankers are already losing the battle of ideas – just read the comments on recent tweets from the International Monetary Fund, the Bank for International Settlements, the Federal Reserve or the European Central Bank; you will find it difficult to come up with a single positive answer. Attempts to damage Bitcoin’s reputation with bogus environmental concerns may act as a distraction for a while, but they will not solve the euro’s underlying problems.

In the coming years, the Europeans will experience an increasingly stark contrast: increasingly desperate attempts to save the monetary union and an increasingly reliable monetary policy for Bitcoin. The smear campaign will continue and will likely be much more hostile than it is today. Hopefully, despite the official narrative, the public will be able to tell fact from fiction and make healthy money on their own.

This is a guest post by Josef Tětek. The opinions expressed are solely their own and do not necessarily reflect those of BTC, Inc. or Bitcoin Magazine.