Editor’s Note: With so much market volatility, stay on top of daily news! Get caught up in minutes with our speedy summary of today’s must-read news and expert opinions. Sign up here!

(Kitco News) – Over the past few years, Cardano (ADA) has consistently been one of the top-ranking layer-one blockchain protocols in terms of market cap and popularity on social media.

Despite these facts, the network continues to fall short of its full potential, according to billionaire entrepreneur Mark Cuban who recently stated, “it’s just not there yet” when it comes to having a larger impact on the cryptocurrency ecosystem.

When looking at the project from a business owner’s perspective in a similar fashion as he does on the popular show Shark Tank, Cuban noted that “there’s gotta be a there, there,” suggesting that Cardano has yet to make itself stand out from the field and offer something new.

A deeper dive into Cardano’s on-chain activity shows that Cuban has a valid point, with data from Messari showing that the network’s transaction count has ranged between 52,900 and 93,409 over the past two months.

This pales in comparison to the most active blockchain networks such as WAX and Stellar, which processed 22.5 million and 8.9 million transactions, respectively, over the past 24 hours, according to data provided by Bloctivity.

Even Bitcoin outperformed Cardano in terms of transaction count over the past month despite not boasting any smart contract capabilities, processing a daily average that ranged between 198,306 and 283,820.

Despite the adoption struggles for Cardano, Cuban noted that “the door is open” for the network to see an uptick in use if it can launch a popular decentralized application (DApp) that excites users and helps the protocol generate more revenue.

This insight into Cardano from a business perspective comes as ADA is attempting to breakout above the major resistance found at $0.54, which has proven to be a tough nut to crack following three previous attempts. 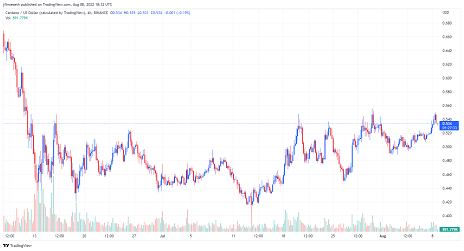 The network is currently in the process of preparing for its Vasil hard fork, which has already been delayed twice due to the discovery of unanticipated bugs. IOHK, the company behind the advancement and promotion of Cardano, has yet to announce the scheduled date for Vasil, but the price of ADA is expected to respond positively once the official hard fork date is revealed.