The hottest esports chess event ever, the FTX Crypto Cup, kicks off next week with world champion Magnus Carlsen and new rival Alireza Firouzja topping a stellar line-up. The all-play-all tournament is the Meltwater Champions Chess Tour’s second Major of the season and will be held on-site at the Eden Roc Miami Beach in Miami, Florida, from August 15 to 21.

It will be the first esports chess tournament of its kind ever held on US soil and carries the Tour’s largest prize fund so far this year. On offer is $210K plus an additional $100K tied to the price of bitcoin provided by leading cryptocurrency exchange FTX.

The world-class tournament follows a thrilling battle for qualification titled the FTX Road to Miami that saw US star Levon Aronian book his place.

The talented New Yorker Hans Niemann has also been handed a wildcard for this event, along with Firouzja, the teenager who recently hit world No.2 and is widely tipped as a future World Champion.

Another super-talented teenager, the Indian wonderkid Rameshbabu Praggnanandhaa, will also fight it out for first place. Pragg, as he is known, qualified for the FTX Crypto Cup by finishing second in May’s Chessable Masters tournament and has beaten Carlsen twice this season already.

Carlsen, meanwhile, qualifies as the current overall Tour leader having already won two events this season, the Airthings Masters in February and the Charity Cup in March. Qualifying from second place on the leaderboard is Poland’s Jan-Krzysztof Duda, the winner of the Tour’s first Major, the Oslo Esports Cup in April.

Vietnam’s US-based speed chess specialist Liem Le joins the roster from fourth in the leaderboard alongside Dutch No.1 Anish Giri, who stands sixth.

Format: Players will go head-to-head in one four-game match a day for seven days, with the winner the player who accrues the most points overall. 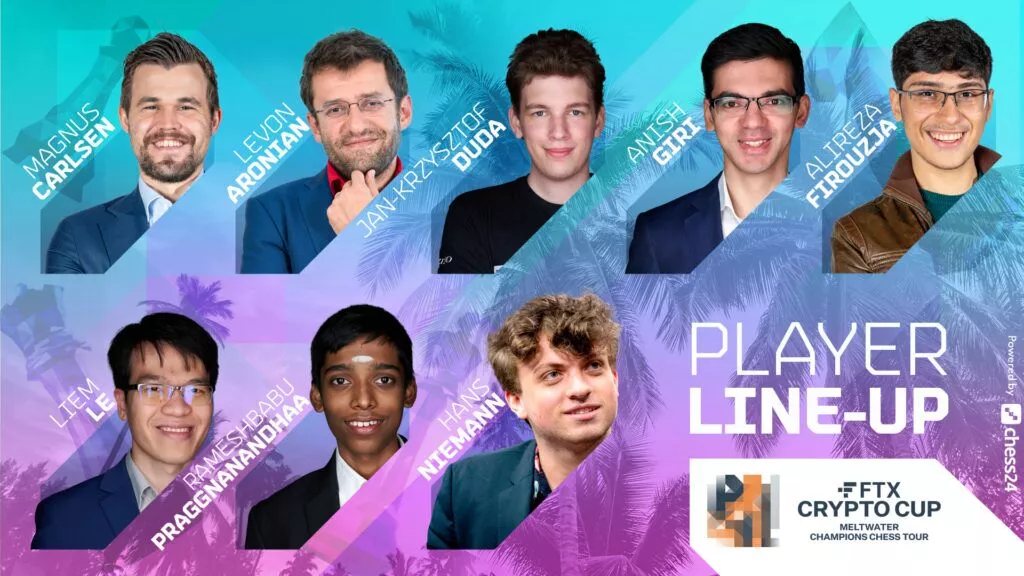 The FTX summer of chess

At Play Magnus Group, we are looking forward to what will be a truly special event in Miami featuring the game’s hottest stars right now thanks to our partner FTX. Magnus vs Firouzja is just a mouth-watering match-up, and then there’s Pragg in the line-up too with Duda, Giri and Aronian just to start with!

We also have an opening ceremony lined up on August 14 and, for the first time, spectators will be allowed to see a tour event live on the final two days. It will be a feast of chess which we hope everyone interested in the game can watch and enjoy. And, of course, it will come with the usual full live coverage from our Oslo commentary team.

As part of the FTX Crypto Cup, an exclusive key will be offered for free to fans around the world that will unlock unique fan experiences including fantasy challenges, chess activities and giveaways, and $100K in rewards and prizes which will be distributed throughout the summer and during the tournament.

Anyone can claim the key for free by visiting https://ftxcryptocup.com/ and claiming the free NFT with their FTX wallet.

The event will be the second Major of this season’s Meltwater Champions Chess Tour and kick off with a star-studded opening ceremony on August 14.

FTX is the Official Cryptocurrency Exchange Partner of the Meltwater Champions Chess Tour and was the title partner of the first FTX Crypto Cup in the inaugural season of the Tour.