Payment systems are suboptimal today. You need a bank, a card or a Paypal account and eventually you need to pay… to be able to pay! Yes, it’s absurd. This leaves a big gap for blockchain technologies to fill. There are 2 ways to tackle this: a token dedicated to payment or re-invent the base layer that could be used anywhere by developers for all e-commerce websites. This is what Coti is working on: becoming a crypto-payment module (like Nimiq) for e-commerce. In other words, the medium of exchange of the future: an augmented version of Stripe.

COTI is a blockchain that allows you to pay for things with the lowest possible fees. Also, COTI offers a ready-to-use service users can appeal to in cases of fraud or any other dispute related to deals settled through the COTI payment system. In terms of technology, it is using the Trustchain protocol: a sophisticated piece of engineering to make all this happen. The Trustchain algorithm utilizes “Trust Scores” to determine the amount of PoW necessary to confirm a transaction. The higher a user’s Trust Score, the faster the confirmation time. That system is called a Proof of Trust (PoT) consensus.

It is essentially 3 products: 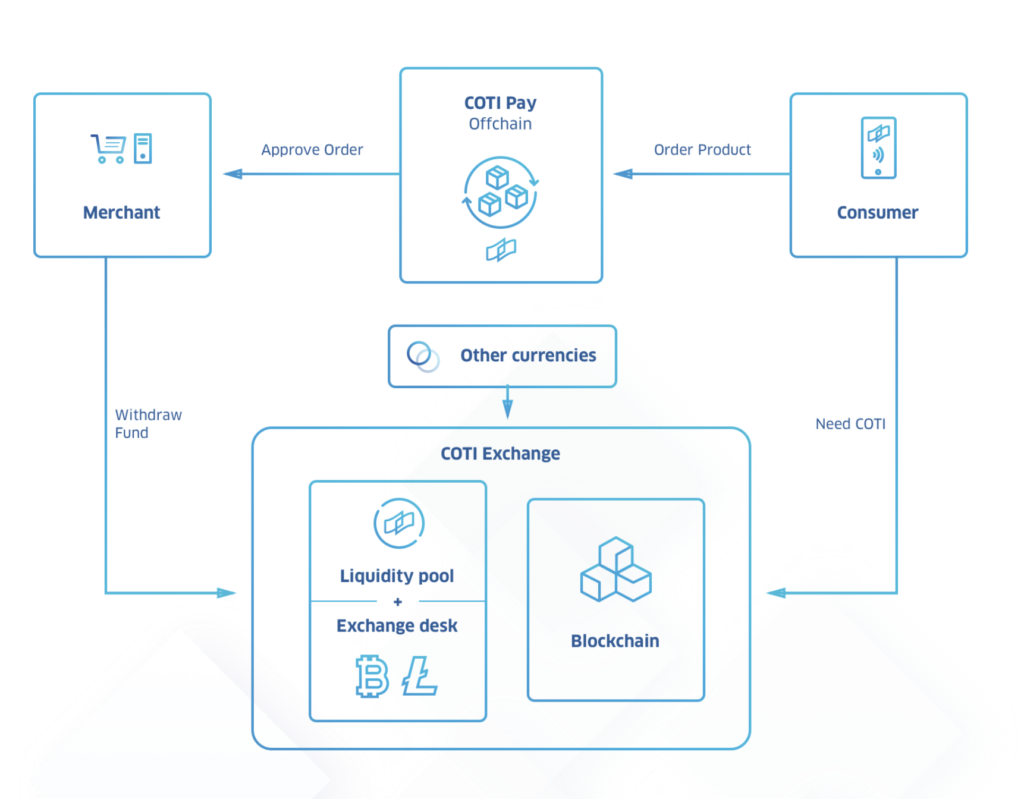 -The second one is a white label network that is the foundation for COTI Pay:

For example, you could imagine companies using that white label network to transact in any currency based on any wallet.

-The third one is a platform to issue stable coins:

Indeed, the COTI network is a good place to create fixed-price assets like stablecoins to make the platform even more credible and liquid. For example, the platform hosts a stablecoin called Djed. Djed operates by maintaining a reserve of base coins, while minting and burning various other stable assets and reserve coins. It is a Cardano stablecoin. One benefit of this is to make transaction costs more predictable, thus avoiding volatile and exorbitant gas fees for users. The COTI development team believes that stablecoins are a ‘killer app’: a key point of their product. The company was the first recipient of equity investment from the cFund for Cardano developments.

First, you can use COTI to pay or get paid for services. For example, this is a typical payment flow for a merchant using COTI to charge users:

The first step is a checkout step of an e-commerce website, then you’re redirected towards the COTI login page. Eventually, you’re asked for a confirmation for you payment. And that’s it, it’s that simple! That really makes me think that the solution can grow faster than people can imagine if crypto payments becomes mainstream in the next couple of years.

To give it a try and figure out if it can be useful to you, you can open an account here (for individuals or corporations) if you’re interested in their payment system: 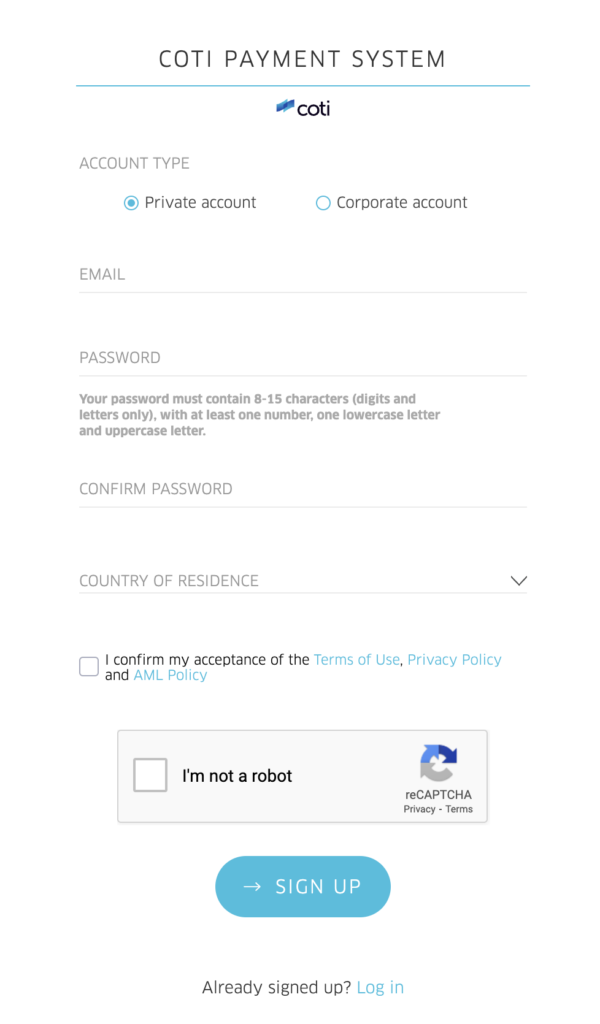 Then, you can also open a wallet and deposit some tokens into their Treasury liquidity pool to stake them:

The APY can be very rewarding (but volatile) so feel free to try and see by yourself. This part of the project makes it also exposed to the DeFi world with the possibility to grow your funds with a flexible yield.

Finally, you can also invest in the COTI token directly on an exchange.

3. The team and the project

The COTI team includes engineers, mathematicians, economists, researchers and veterans from the fintech and banking industries: 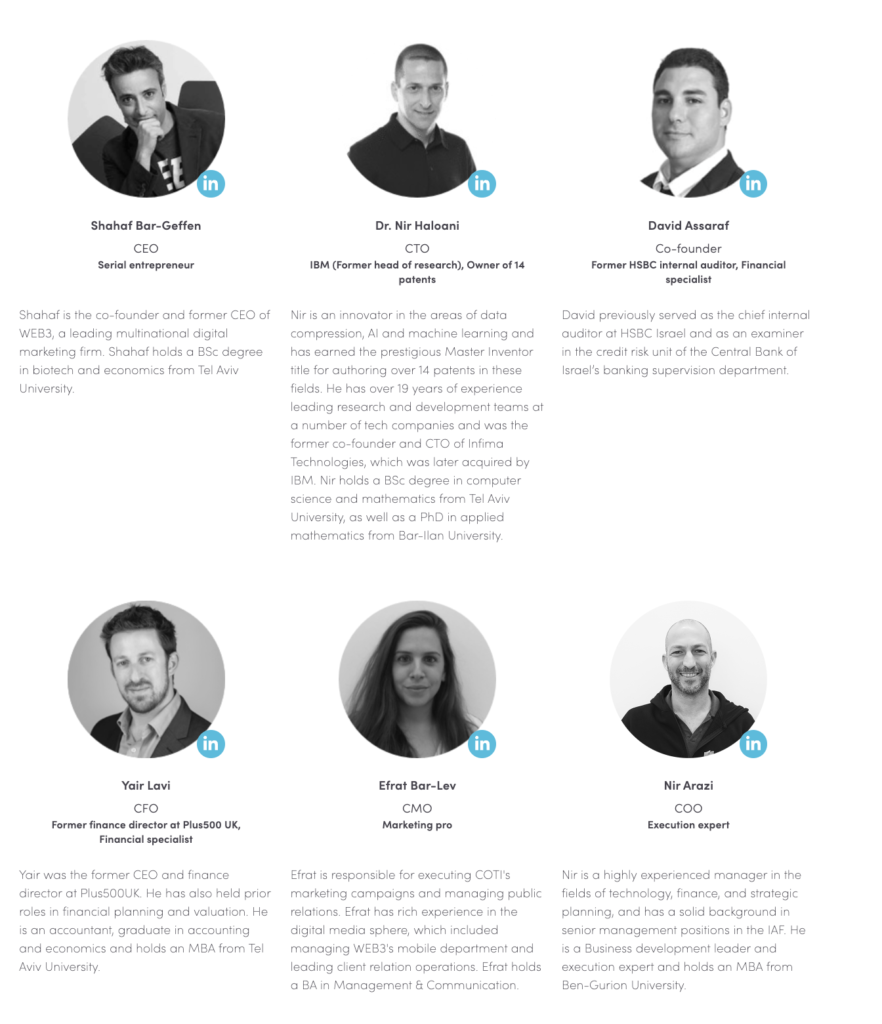 I like seeing a mix of web3 disruptors and corporate people: this association is very important for a fintech company that will have to deal with regulation questions in the years to come.

Also, another reason why their team page is impressive is the headcount: 38 people working for the core project.

Now, I will play my favorite game: checking their GitHub. I will have to prove it one day, but to me this is an order 1 metric to assess a project’s future performance. The last updates are all from today or yesterday, first good point:

Then, the number of code contributors is 13, it looks little but believe me it’s not. I’m scanning a lot of GitHub accounts and this is average++, it’s not rare to see 1 to 10 developers on altcoins. 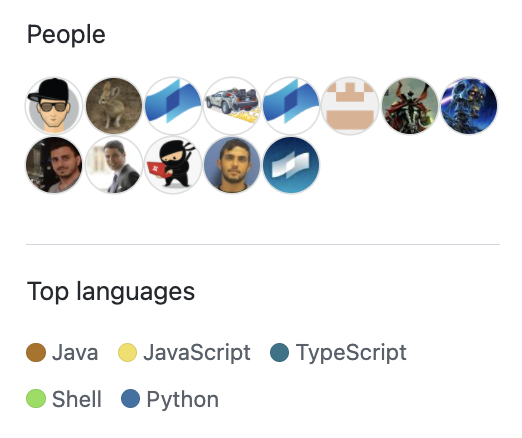 Finally, in terms of investors and advisors, I like to see Cardano in there, another credible project that has a lot of traction with developers: 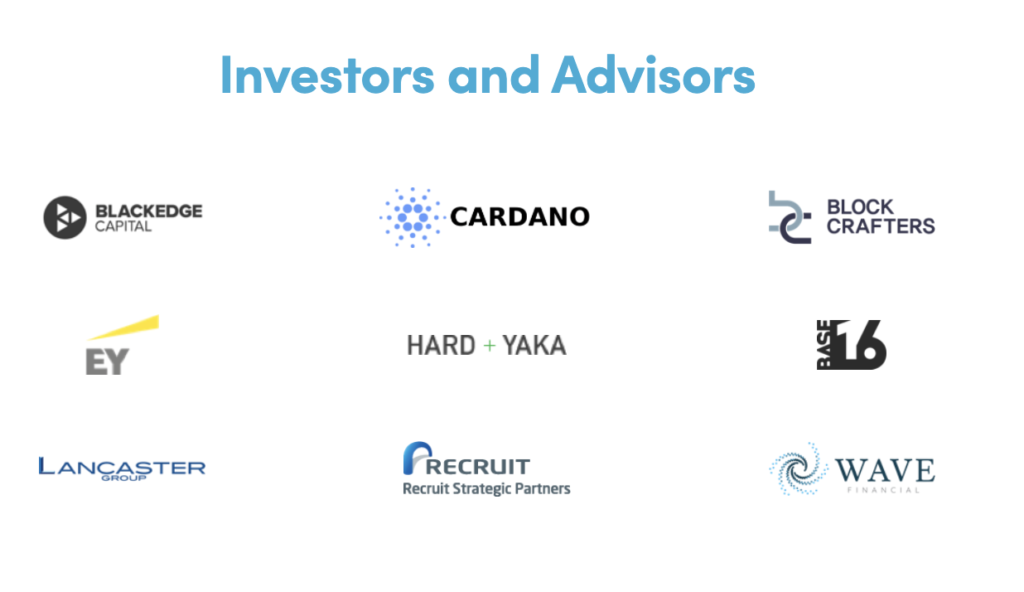 What about the roadmap? 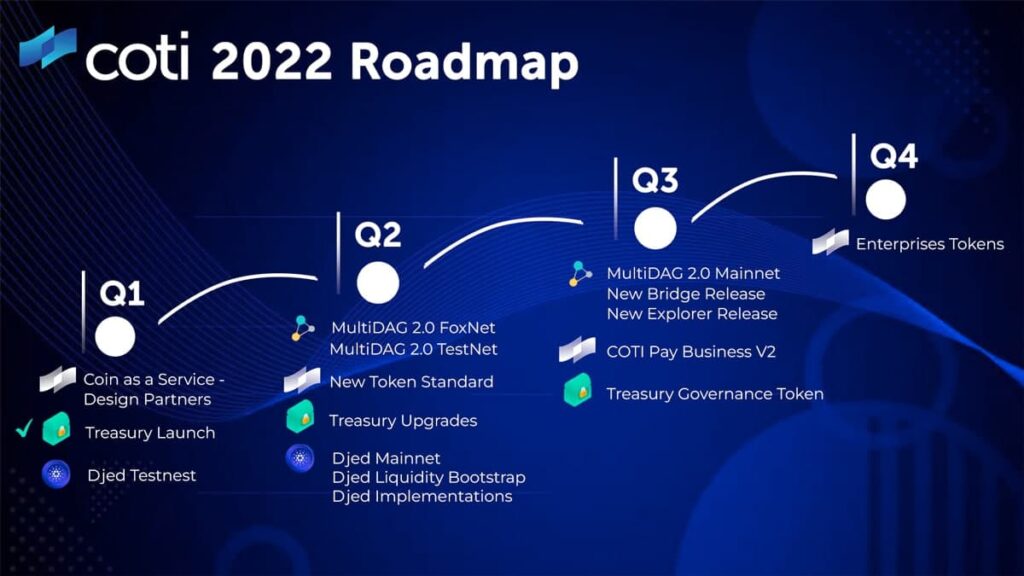 It includes Djed integration, MultiDAG 2.0 launch, Coin as a Service, and upgrade of the Treasury Governance Token.

-Djed integration: Djed is a stablecoin based on an algorithmic design built on the Cardano blockchain. It uses smart contracts to ensure price stabilization, and that the coin will be useful for decentralized finance (DeFi) operations.

-MultiDAG 2.0: Through MultiDAG 2.0 developers, merchants, and enterprises will be able to issue tokens on the Trustchain and then transact using these tokens across wallets like VIPER and COTI Pay Business.

-Coin As A Service: Coti will be offering enterprise clients to utilize the MultiDAG technology to issue stablecoins and other digital currencies on their terms. In a word, a stablecoin factory.

– Finally, an enterprise token will be launched. This has been secured in a deal earlier this year and they will give more update soon.

4. COTI as an investment

The COTI price did +50% during the April rebound. It’s an important point to consider because good projects tend to feel the “Bitcoin gravity” a bit less than the others. What I mean by that is that when Bitcoin becomes bullish again, they explode faster than the rest of the market. It’s what happened in the last couple of weeks, with a price surge and a volume surge: 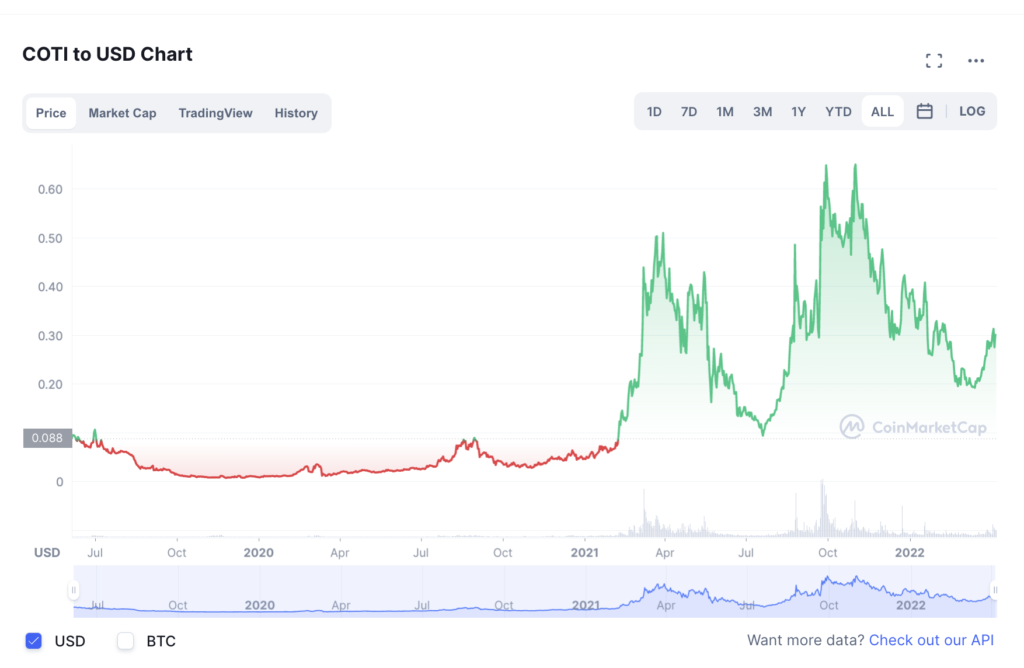 It gives an idea of ​​how the market values ​​the token when things become bullish for the asset class as a whole.
It’s also worth pointing out that there is a growing number of unique addresses holding the asset:

The level of centralization is low and keeps going down, which is a massive positive point:

The 300 million USD market capitalization makes it a medium-large size altcoin, with less risk than the tokens we usually look at on this website:

But the market capitalization of e-commerce is going to the moon and way beyond in the next couple of years, with a nice exponential shape showing how the economy will become completely digitalized: 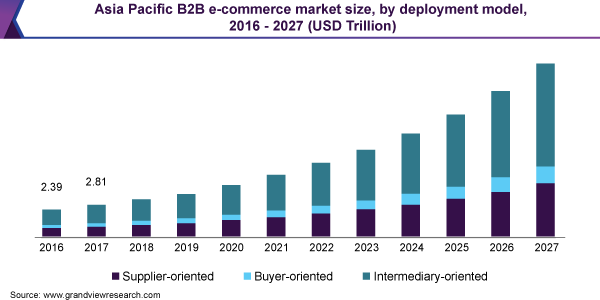 For example, a figure I still can’t really digest is the forecast for 2027. The market capilatization of e-commerce in 2027 is an astonishing 27 trillion USD:

Now let’s assume that Coti takes about 1% of that cake (not absolutely unrealistic: it’s one of the crypto-payment leaders at the moment) it’s 271 billion USD of market capitalization: a miracle that could bring the token to 1000x from here in 5 years! It might sound unreal but I’m not a “moonboy”, this calculation is based on realistic ratios.

Per the report above: “The global e-commerce market size was valued at USD 9.09 trillion in 2019 and is expected to grow at a compound annual growth rate (CAGR) of 14.7% from 2020 to 2027. Increasing penetration of internet is bolstering the Smartphone using population across the world. Digital content, travel and leisure, financial services, e-tailing among others constitute a variety of e-commerce options available to the internet accessing customer base that are gaining momentum with increased internet usage.”

To conclude, I consider COTI as an incredible gem. All of the above makes of COTI a payment system, a stablecoin factory and a whitelabel network that could be used around the world. It sounds like a fantastic recipe to me.

Also Coti is a very large and talented team, a lively ecosystem of developers, a growing number of wallets and a market capitalization big enough so that it is not too risky while still having a fantastic upside potential due to the skyrocketing e-commerce playground. It is the next altcoin I will invest in, probably heavily.

However, the risk is the regulation. COTI is at the intersection of all the risks: potentially a security and a payment system. The bet you take when you invest in COTI is to assume that crypto payments will become mainstream and that altcoins will become an asset class as a whole. Christine Lagarde won’t like that. That being said, do you know who usually wins when a revolutionary technology plays a game against the rest of the world? I’ve studied history. I know.

Disclaimer: this is not financial advice

Founder of The Altcoin Oracle