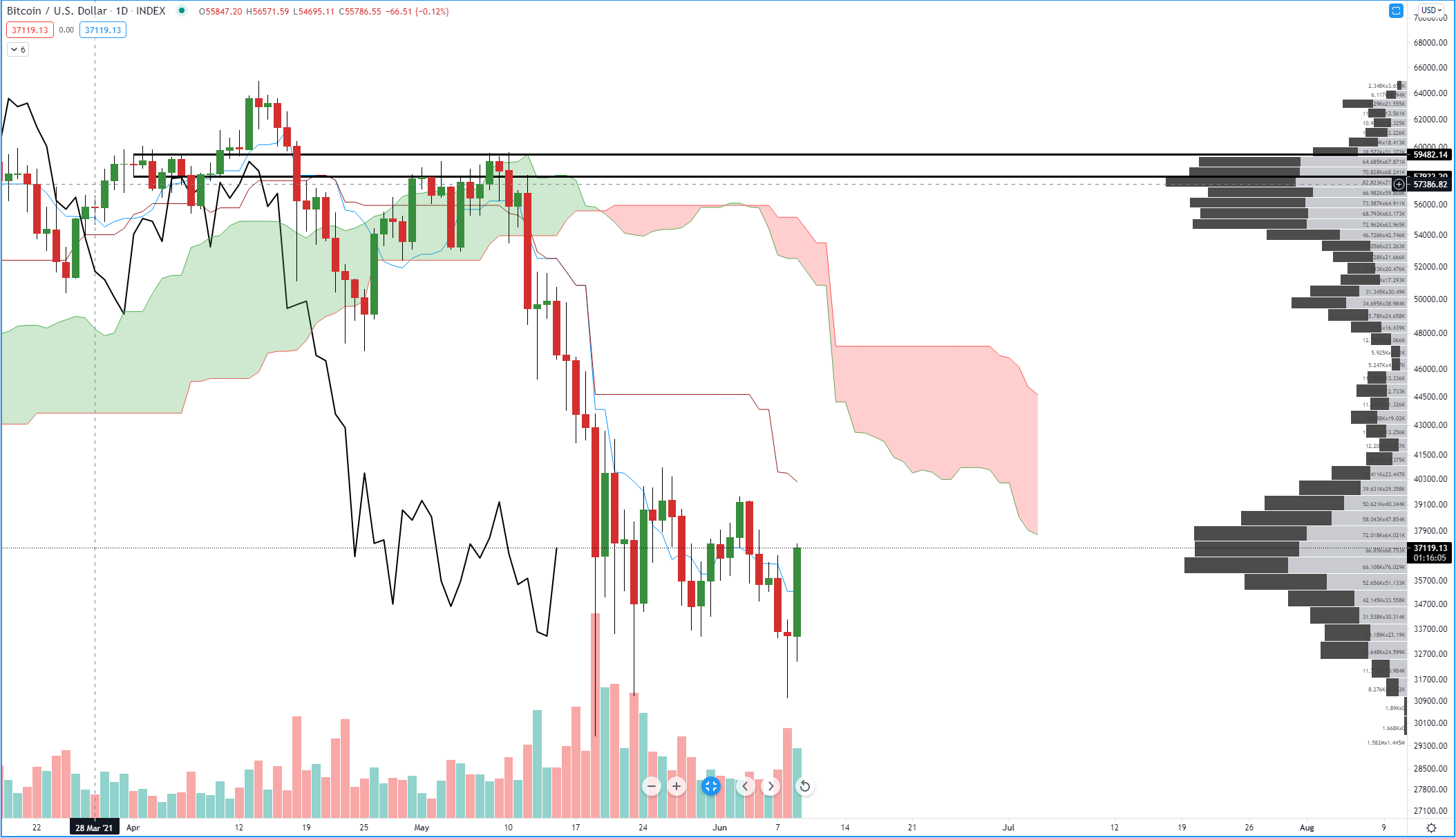 Bitcoin certainly made an impressive rally in Wednesday’s trading session. At the time of writing (1830 EST), Bitcoin is up over + 11% over the day. The body of the daily candlestick from Wednesday is currently devouring the last four daily candlestick bodies – and the volume isn’t too shabby either. The short-term resistance for Bitcoin is in the range of 40,000. 40,000 as an integer is a natural psychological number around which market participants gather to decide which direction to prefer. In addition, the daily Kijun-Sen is in the range of 40,000, so we should expect normal resistance there. A test of the Kijun-Sen would be the first test of this level since the May 19th collapse. First, however, Bitcoin has to burst above the high-volume node, which is currently at 37,000 and 38,000. And to keep things interesting, there may not be as much resistance at 40,000 as we would expect as the volume profile shows a massive drop in participation between 38,000 and the next high volume node at 48,000. According to the volume profile, Bitcoin could shoot through just 40,000 with little effort. Look for strong sales and a resumption of a downtrend if strong resistance is found at 40,000. 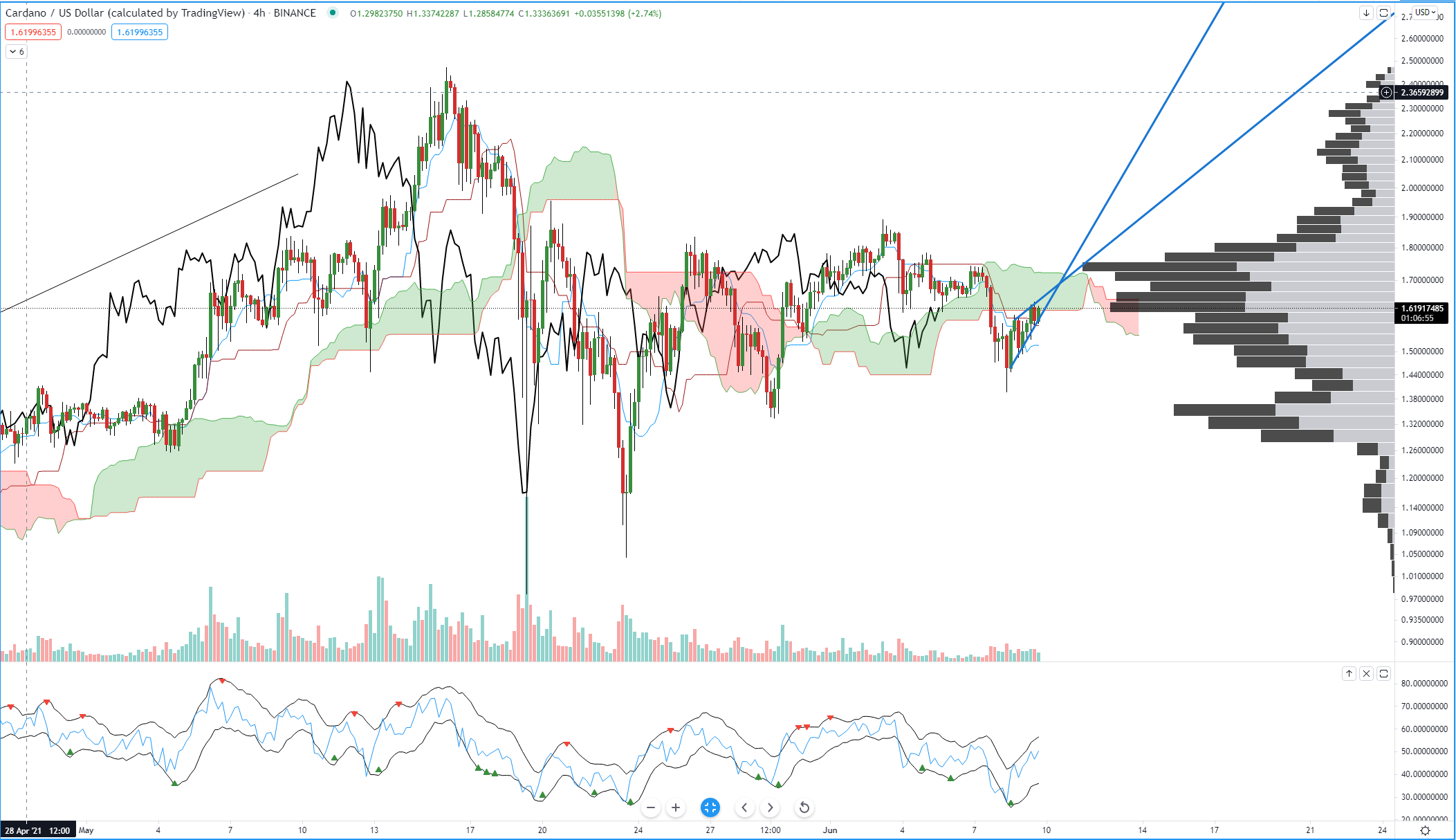 The above chart is Cardano’s 4 hour chart. The two blue trend lines I drew form a rising wedge. The rising wedge pattern is an inherently strong bearish pattern that screams “over the top”. Ideally, this pattern is found on the daily chart and above – as with all patterns, the longer the chart timeframe, the more effective it is. While the rising wedge pattern is strong for a bearish reversal, the 4 hour chart itself is not a particularly slow timeframe and could easily negate this pattern. The short-term resistance on the 4-hour chart is 1.61 on Senkou Span B. The final level of resistance for Cardano on the 4-hour chart is the psychological number 1.75, where the top of the Kumo (Senkou Span A) also shares the high-volume node on this chart. When Cardano breaks and holds above the 1.75 value area, making new all-time highs can be very easy. 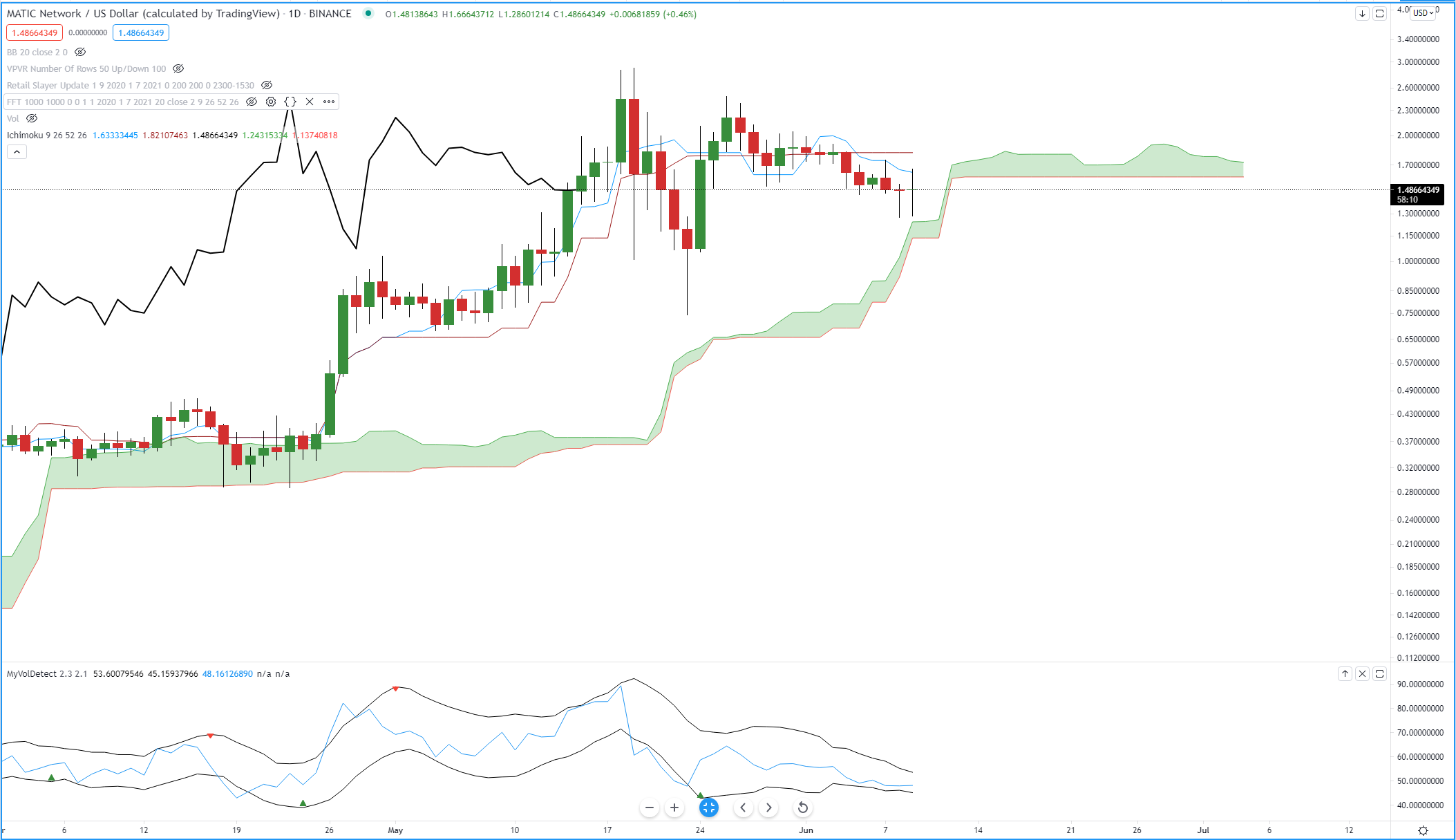 The above daily chart from Polygon shows us that Tenkan-Sen at 1.64 and Kijun-Sen at 1.83 are the main short-term resistance values. This is the sixth day in a row that Polygon has traded below both the Tenkan-Sen and Kijun-Sen on the daily chart. We may also see the first day that the Chikou Span not only closed below – but has actually been trading below the candles since March 31, 2021. March 31st was December 7th, 2020. The overall pattern that Polygon shows is an odd version of a bull flag – but it’s a bullish continuation pattern nonetheless. Another condition that could indicate a bullish upswing in the near future is the RSI – it’s currently at 48.5. When an instrument is in a bull market, the oversold levels in the RSI are 50 and 40. If we see a sharp rise in the RSI from either level, we could see a breakout above the daily Kijun-Sen and then a path to something new All time highs. Resistance is high on all cryptocurrencies, however, and Polygon could easily prepare for a big bull trap.

Save money on your currency transfers with TorFX, voted International Money Transfer Provider of the Year 2016-2020. Their goal is to connect customers with highly competitive exchange rates and uniquely dedicated service, whether they are trading online or over the phone. Find out more here.