Is there a risk of a Bitcoin value “double bubble”?

The following is from a recent issue of Deep Dive, Bitcoin Magazine’s premium market newsletter. To be among the first to get this insight and other Bitcoin market research delivered to your inbox, sign up now.

With Bitcoin priced close to $ 50,000, momentum has returned to the market and strong hands have amassed more Bitcoin than ever before. A 2013 style double bubble is in sight.

In the 2013 cycle, Bitcoin price fell 75% from highs before rising a staggering 1,750% in less than six months. We are not saying that the rally will take place again with the same performance, but rather an explosive “double bubble” within the traditional four-year boom-and-bust cycle.

The market has also gone through a fairly similar cycle compared to 2013, with an initial parabolic run-up, a large amount of coins becoming liquid before an aggressive re-accumulation and parabolic run-up. 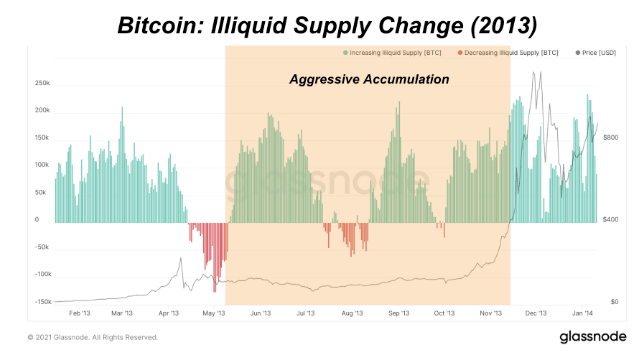 If Bitcoin continues to move into strong hands at the current pace, a parabolic run-up will begin that most in the world cannot comprehend. Bitcoin, which is now worth nearly $ 1 trillion in net worth, can grow to $ 5 trillion in fortune relatively easily in 2022.

After all, $ 1 of capital flowing into Bitcoin adds far more than just $ 1 of market capitalization to the asset, and during a bull market where most market participants hold, the market value explodes up to Bitcoin’s realized value. When 1% of the capital from global debt funds flows into Bitcoin as a safe haven as the global economy experiences massive disruption in the supply chain resulting in soaring prices across the board.