Cardano price broke through the descending channel a couple of days ago and since then it is maintaining a notable uptrend. However, now it appears that the decisive phase has approached where-int the ADA price has to uplift itself from the current ascending consolidation. No doubt the asset is trying hard to do so, but the strong bullish momentum is lagging behind and a slight jump in selling volume may nullify the buying pressure.

The ADA price as seen in the chart is a lagging strength. And hence after ranging within the upper bands of Bollinger Bands for a couple of days, the bands are experiencing a squeeze at the press time. Also, the price after hitting the lower bands has flipped and heading upwards. Therefore, the squeeze may result in the price spiking upwards and if it smashed the levels above $1.17, then a healthy uptrend may be validated.

XRP price flipped the consolidation since the beginning of the current trading month and spiked high gaining more than 54%. Further, the price quickly fell into a deep bearish well by plunging nearly 16%, yet the hopes of a notable uptrend still appear to be pretty high. However, the asset needs to attain certain levels all alone to gain the bull’s confidence. 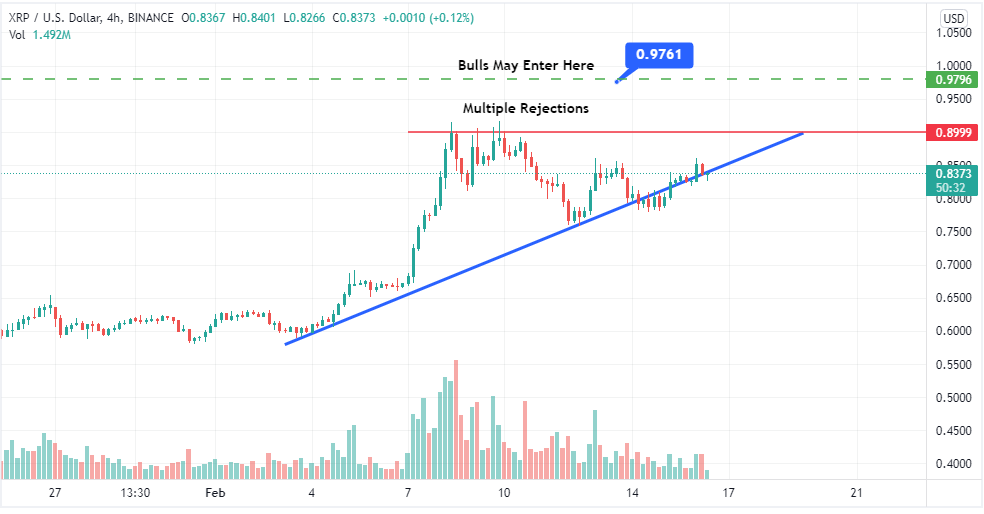 The XRP price maintained a considerable uptrend since the beginning of February 2022 and trended above the uptrend line. Woefully, the asset slightly plunged below the trend line after trying hard to flip a couple of times. The recent attempt of ranging above trend line also went in vain, while the asset since the early trading hours appears poised to be successful today.

Once the XRP price maintains a notable uptrend within the ascending triangle, a breakout from its apex may result in the asset hitting the immediate resistance at $0.89. Here the asset faced rejection multiple times before and hence is considered as one of the important levels to sustain and maintain an uptrend until $0.97. Here the bulls may gain confidence and jump into uplifting the price above $1.

Binance Coin Price always maintains a considerable silent trend and bounces finely without the need for any boosts or external factors. Being the native token of the world’s most popular crypto exchange, the huge user base on Binance fuels up the BNB price. As the platform offers a discount on fees and some other benefits for BNB holders, the BNB trading volume has spiked drastically. And moreover, the asset is displaying huge momentum to range high with a huge margin. 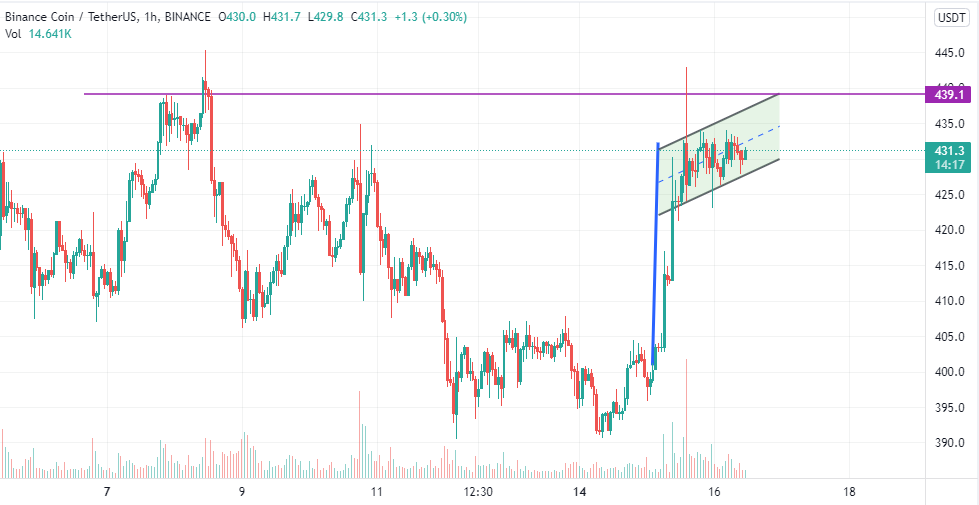 The asset spike nearly 10% during the previous day trade and moreover is consolidating in an ascending fashion from early trading hours. And hence formed a notable bullish flag which results in an explosion in the price with a breakout. The price is swinging within the parallel channel within the flag and after reaching the apex, the asset could breach through the channel and hit the immediate resistance above $440. Further maintaining the same trend it may eventually smash the $500 price levels very soon.