This article is a respectful partial agreement, but more of a disagreement, with Dennis Porter’s article, Why Bitcoin Represents The Ultimate Single-Issue Voting Bloc.

First of all, Bitcoin is non-political.

However, many people who own bitcoin vote in elections, and all live in countries where the government can influence bitcoin, its ecosystem, and how it is regulated.

A definition of apolitical is “no interest in or association with politics”.

A second definition of apolitical is “having no political relevance or importance”.

Bitcoin does not care about politics and does not belong to any party in any country. According to this definition, Bitcoin is apolitical.

However, bitcoin is becoming of political relevance or importance as it becomes a government concern for regulation and oversight within or alongside the current federal monetary and economic system.

As Dennis Porter notes, single-issue voting is all about a single point of passion for individuals.

Single-issue voters vote on a candidate’s stance on areas such as “gun rights, gay rights, marijuana, or environmental activities.”

Dennis suggests that bitcoiners will vote for a candidate using single-issue voting based solely on whether that candidate supports bitcoin.

My thesis is that bitcoiners can be a coherent, unified apolitical bitcoin force, with some bitcoiners falling into a single-issue voting group.

Some bitcoiners are single-issue voters

I agree that for some people, bitcoin alignment will override every other theme and value a candidate stands for. Bitcoin support is viewed as the higher good, overriding the candidate’s other agenda items. (They may – rightly or wrongly – believe that Bitcoin will fix all other candidate misalignments in relation to issues affecting them.)

In other cases, a candidate’s Bitcoin endorsement could serve as a decider between two candidates if both candidates are equal in all other respects to that voter.

However, a candidate who is simply a bitcoiner may not force some bitcoin voters to choose them over a rival, to choose a bitcoin-supporting candidate over another candidate.

Single spending bitcoin votes are not associated with all sovereign spending

Some of the key issues for many bitcoiners – self-sovereignty in relation to individual rights, freedom and privacy – are why I don’t see many bitcoins as a single issue voting block.

On issues like gun rights, gay rights, marijuana rights—or other areas like pro-life or pro-choice—many, and perhaps even most, bitcoiners will not be single voters and will not make that choice in the voting booth.

These areas are about individual rights and freedoms for yourself and your friends and family members.

So let’s outline some scenarios of different candidates.

Let’s look at some voters and their various problems:

Obviously the last bullet point of each example is exaggerated. (Or is it a metaphor?)

All of the above questions from Bitcoin voters are about self-sovereignty.

Individual rights and freedoms are issues that unite most Bitcoiners.

However, they do not unite bitcoiners on all issues related to all individual rights around the world.

Furthermore, freedom of choice within different rights does not live and breathe as a single issue uniting politicians across the political spectrum.

Would any of these voters vote for a Bitcoin candidate working to take away their (or those close to them) freedom and rights?

We are individuals first and then tribal, family or group oriented. As a parent or caregiver, child or sibling, friend or colleague, we are usually motivated to protect our rights and those of our immediate families and friends first.

If we turn around the world, could you see how most bitcoiners are voting for a bitcoin guide that would limit the rights of certain groups of people? Would we vote for international leaders who lock up certain people in camps, deny them bank accounts, or monitor or limit their purchases, lifestyle, speech, or ability to vote?

Instead, I see two larger, more cohesive, and even more powerful bitcoin groups.

The authors of “Bitcoin and the American Dream” and Dennis Porter are among those leading the first group.

These two groups represent a uniquely non-political Bitcoin force. The second group is a subset of the first group.

First, bitcoiners as a group that educates and advocates for politicians of all political affiliations – to move towards bitcoin.

Education is a key issue in politics. Most leaders don’t understand bitcoin.

However, it is extremely important to be factual and very specific when it comes to bitcoin.

Bitcoiners (and any bitcoin advocacy group) need to collaborate and get community visibility into detailed aspects of energy use, economics, and technical implementations.

Advocating for bitcoin is another important issue and action that all bitcoiners can take with their government, regardless of party.

Call, email, or text your chosen leaders and provide them with credible information about Bitcoin.

Second, politicians who support bitcoin could unite on bitcoin’s single issue. Many already are. Any bitcoin politician should be able to align on bitcoin commonalities with any bitcoin-aligned candidate.

Note: One caveat is that just as many Bitcoiners have differing opinions and facts within the ecosystem, it is likely that many Bitcoin-aligned candidates will also differ opinions or statements on similar areas. Often with a lack of accuracy.

However, Bitcoin policymakers could align with Bitcoin even if they have severe misalignment on other issues. The political pages currently look like this:

By its very nature, Bitcoin is freedom money and money for people with different views on how to trade in life. (The axiom is that bitcoin is money for enemies. However, anyone who disagrees with your views and actions is not necessarily your enemy.)

It’s possible that Bitcoin’s underlying ethos could shift the political needle toward collaboration, coordination, and compromise in other areas that involve agency. 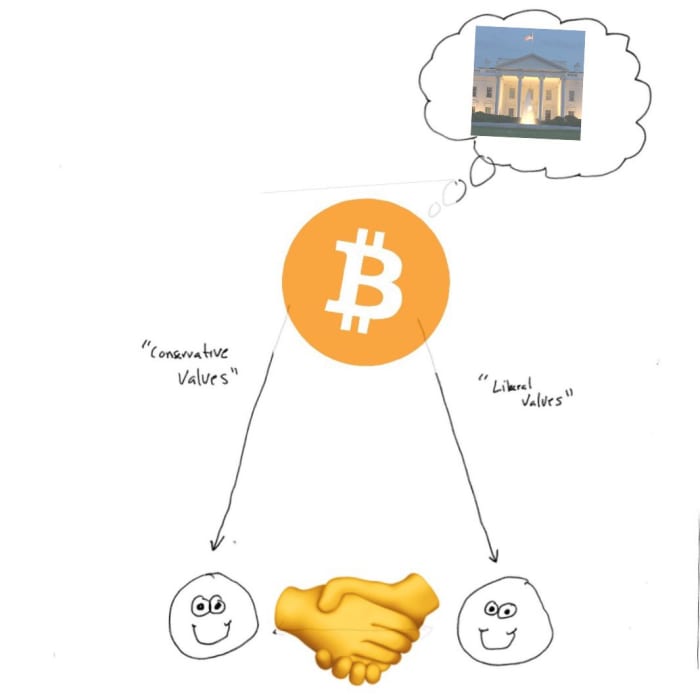 Bitcoin as a Unique Apolitical Force

Bitcoin could be a unique entity that unites politicians from across the political spectrum.

It can persuade politicians and other government officials to think in line with Bitcoin’s values ​​of individual rights, freedom, and choice.

Likewise, uniting bitcoiners from across the political spectrum to educate politicians about bitcoin is the bipartisan moonshot that many are working toward.

Regardless of how and who we vote in the voting booth, Bitcoin can underlie and fix many problems.

However, Bitcoiners have many other issues that are high priority as they mark their ballots for the people who will reside and preside in the next government.

In these cases, many Bitcoiners are not single-issuer voters.

But they are part of bitcoin’s larger, uniquely apolitical power.

This is a guest post by Heidi Porter. The opinions expressed are solely their own and do not necessarily reflect those of BTC Inc or Bitcoin Magazine.